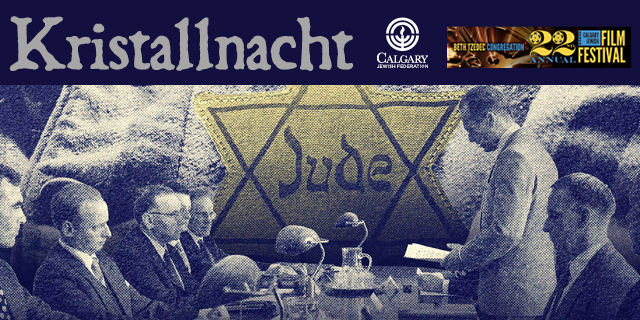 Join Calgary Jewish Federation at 6:45pm for our Kristallnacht commemoration of The Night of Broken Glass. Following our virtual presentation, join us for the Calgary Jewish Film Festival screening of Reckonings at 7:00pm – a film featuring a group of German and Jewish leaders, under the threat of violence and six years after the Holocaust, who pushed for reparations as a step towards healing. View the Kristallnacht commemoration video.

Register for FREE Reckonings film screening – open to the entire community at no charge as part of the community-wide Kristallnacht commemoration.

In the aftermath of the Holocaust, in a hidden castle near the Hague, secret meetings were held to negotiate the unthinkable — compensation for the survivors of the largest mass genocide in history. Survivors were in urgent need of help, but how could reparations be determined for the unprecedented destruction and suffering of a people? Directed by award-winning filmmaker Roberta Grossman, Reckonings chronicles the tense negotiations between Jewish and German leaders. Under constant threat of violence, they forged ahead, knowing the compensation would never be enough but hoping it could at least be an acknowledgement of the genocide and a first step towards healing. Through a captivating mix of dramatic re-enactments and interviews, Reckonings brings to life the untold story behind the ground-breaking Luxembourg Agreements of 1952 – the first time in history that individual victims of persecution received material compensation from the perpetrators.