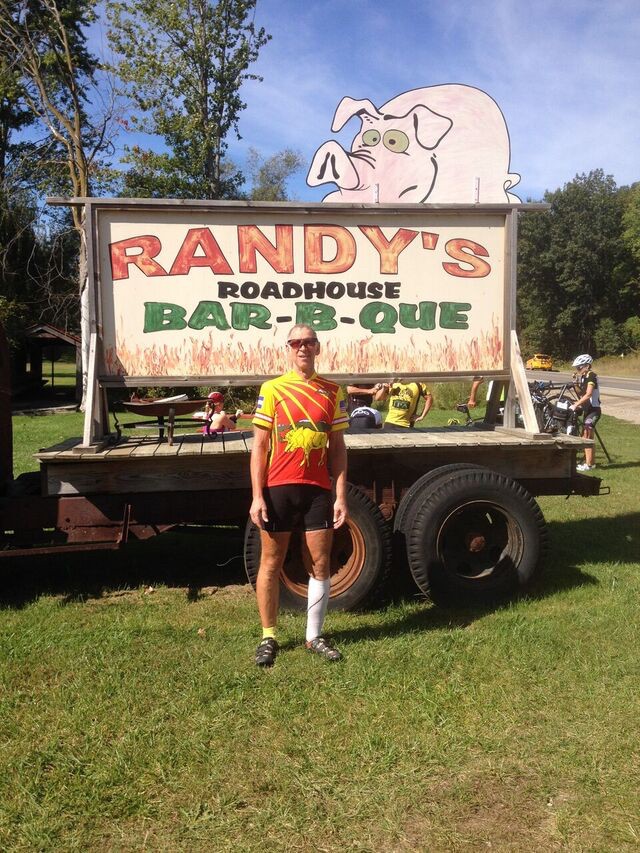 We've cycled 31 of 40 days.  By my present calculation, the total will be over 6000 kilometres with over 44 kilometres of vertical gained.

2.  A large reward to whoever invents a hotel room fridge that runs quietly.

3.  Dan McHugh story:  Dan is 47, an investment advisor from near Toledo, Ohio.  We've spent a lot of hours together cycling and eating and kibitzing.  Dan's wife and 2 children have had a series of health issues, 23 surgeries in total.  Dan's wife is a breast cancer survivor.  Teresa is a speaker at functions and is involved in raising funds and putting on events.  Teresa spoke recently at survivors' breakfast.  Their daughter Callie videoed a part of the speech.  I was with Dan, watching his face as he watched the video.  He, like I, puts his wife on a very high pedestal.

Our route was to take us within 12 km of Dan's home.  He had ordered a special pink breast cancer cycle jersey to wear that day and gave each of us survivor lapel pins which we all wore on our jerseys.

At lunch, a friend of Dan's joined us to ride in.

About 60 km out, a brother and friend joined us to ride in.  About 40 km out, all his co-workers were gathered at a state park and greeted us with pizza and drinks.  From there, the organized route turned south.  Knowing there was a party waiting for Dan at his sister's near his home, a couple of us rode on with the McHugh entourage.

We had to walk out bikes across a train track.  There was a police car waiting on the other side.  I thought we'd done something wrong - when the officer asked "how fast do you want to go?"  He was there to give a police escort it.  With his lights flashing, I got to motor pace behind a cop car as we went the 3 km or so to the party.  Ran 5 or 6 stop signs.  I loved it.

Must have been 70 people gathered on the front lawn, with signs and music and food and drink.  Having seen the face on viewing the video, I wanted to see his face when he saw his family.  Most moving.

4.  Since the last rest day in Madison, Wisconsin, we rode across Wisconsin and across Ohio.  The weather has been hot and we've had an eastern headwind; however it's been great.  Wednesday we rode about

145 km and everyone agreed it was a great day.  Then Wednesday evening and Thursday morning there was grumbling and apprehension as the next

As we rode from Wisconsin to Ohio we saw the first leaves with fall colours, some red and orange.  But few so far.  Hoping we'll see more colour as we head through Pennsylvania, New York and Vermont.

8.  I continue to be astounded at the number of bites ingested daily.  It's like we ride to do something between meals and snacks.  The epitome was the night in Sioux Falls.  A group of us went out for a very nice, and very plentiful, Italian meal.  Walking back to the hotel, the 2 guys I was with stopped after 1/2 block and ordered and ate pizza and beer.  Another 1/2 block and they stopped for milkshakes.  (and this was after the 3:30 cheese burger and beer when we pulled into the hotel)