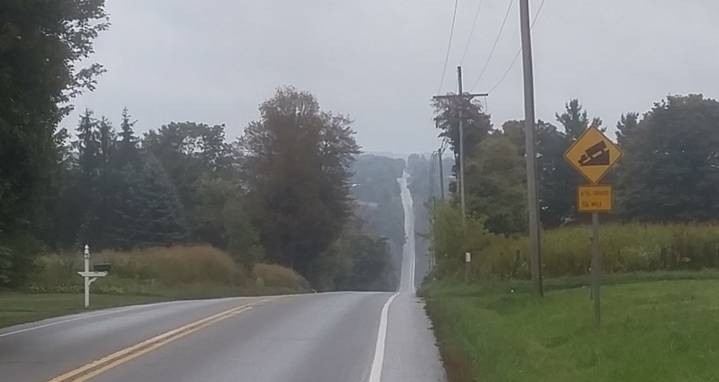 We left the flatland of Ohio (I rode the 203 km from Toledo to Cleveland in my big chain ring) and found climbs, both long and short, but punchy in PA and NY.  Below is a photo from yesterday in rural Pennsylvania.

We had 3 days of rain.  The first 2 were manageable, the third was miserably cold, especially in the morning.  On that last day - which as I will touch on below was another great day - I was cursed by having ridden the whole trip so far.  I was shivering cold and about as miserable as I've been on a bike.  Had I only once earlier on this trip had occasion to have been on the van rather than riding, I would have jumped in.  But, with the streak intact, I kept riding.  Then fortune intervened:

One of the cyclists, Dan Smith, is from New Jersey.  Dan went to Ithaca College, in Ithica, New York, on a baseball scholarship.  He was a pitcher and in 1980, the Ithaca Bombers, with Dan the star, won the national championship for their collegiate division.  We were riding through Ithaca and Dan had planned to meet his buddy, Slick (the centre fielder for that championship team) in Ithaca and to go to the ball field.  Dave, one of the cyclists, a former baseball catcher, and I were going to go along.

It was cold and rainy and miserable and we were all separated - no hope of making anything work.  Dave hit a hole in the road and crashed.  Just as he was getting himself together, a group of us rode up.  By good fortune, he'd fallen directly in front of a bike shop.

He needed a new helmet so we went in, Dave to get a helmet, me more to get warm (though I did buy another jacket to add to my layers to try keep me from shivering).

We were leaving the shop, with no hope of finding Dan, when he rode by.  So Dan, Dave and I rode to the bagel shop where Dan was to meet Slick.

(Background info:  Dan is not really a cyclist.  A daughter has suffered through depression issues and Dan committed to her to undertake an extreme challenge as a part of recognizing what she's been through.)

We are sitting in the bagel shop when in walks Dan's daughter - a complete surprise. His joy was enough to bring tears to my eyes, Dave too.  After bagels and hugging and warming up, we piled into Slick's car for a trip to the ball field.  Then the 3 of us set out for the last 4 hours of cycling.

Many of the cyclists are keeping blogs and include maps.  Our grandchildren are plotting maps of their own.  Examples below.

As I sit here, there are 2 days of riding left and 3 sleeps until I'm home.  I miss our family.  I've missed Carolyn's birthday.  Akiva lost his first tooth; Sophie is taking violin lessons ...

The hills in New York started to impress.  We rode through the Allegheny National Forest and into the Adirondacks.  Tough in the rain.  Then it got cold in eastern New York and as we crossed, today, into Vermont.  I started both of the last 2 days with 6 layers on top:

(I've borrowed the jacket from a friend - mine won't fit over all the other clothes.).

Today we took a ferry across Lake Champlain and rode into Vermont.

Vermont has been exactly what I expected:  beautiful scenery, gorgeous colours, pretty towns and churches and wooden bridges -- and significant climbing.  Today we did over 2000 metres of climbing, with almost half of that coming as we did Brandon Gap and a climb out of Strafford.  Lots of punchy hills with grades of 10-14%.  Certainly helped keep the heart rate up.

Troubling news:  one of our group (Netherlands Marc) was in an accident today.  Details are still sketchy - however he is in hospital with broken bones in one lower leg.  We spoke to him not long ago and he's in good spirits.

2 cycle days left.  A hard day Sunday with 3 big hills.  Then only 104 km and 670 metres of climbing Monday and we'll be at the Atlantic.